Xilinx FPGAs are widely used in cellular RF base station design and other advanced baseband functions in the field of baseband co-processing. In addition to channel card applications, Xilinx FPGAs also support cost-effective implementation of RF card functions such as digital up-conversion (DUC) and digital down-conversion (DDC), including crest factor reduction (CFR) and digital predistortion (DPD) and other advanced technologies. In addition to radio frequency card solutions for WCDMA and WiMAX, Xilinx also introduced a TD-SCDMA digital front-end solution that can implement multi-carrier and multi-antenna configurations.

The power efficiency of radio frequency power amplifier (RFPA) plays a very important role in the design of cellular radio frequency base stations. Efficient RFPA solutions will reduce equipment investment (CAPEX) because smaller power amplifiers can be used for the same desired output power value or require less cooling infrastructure. On the other hand, because it consumes less power, it can also reduce operating expenses (OPEX).

However, a linear combination of carrier signals will have a high peak-to-average power ratio (PAPR). This applies not only to 3G CDMA carriers, but also to multi-carrier EDGE and GSM signals. Due to the linear combination of independent waveforms in the process of generating a single CDMA and OFDM carrier, even a single carrier CDMA or OFDM signal will show a high amplitude factor (CF).

When CF is used to measure PAPR, it can be defined and calculated by the following equation:

Where x is the true value of the up-converted bandpass signal.

The high crest factor requires the commonly used class AB RFPA to operate at certain output back off levels (Output Back Off Level) to prevent high peak signals from driving the RFPA into the non-linear working area. First examine the relationship between CF and RFPA efficiency. The efficiency of RFPA is defined as the ratio of average output power to DC power at a certain operating point, which means that in order to achieve higher efficiency, the RFPA output should be driven close to the saturation point (non-linear effects will occur beyond the saturation point) . However, in actual operation, the output power should be backed up, not only to solve the CF problem of the input signal to RFPA, but also to solve other weak nonlinear problems in RFPA.

Figure 1 illustrates the relationship between input power back-off (IPBO) and output power back-off (OPBO). In order to achieve the desired OPBO level, the IPBO must be increased. Because the operating point remains the same, the denominator in the equation will remain the same, but the numerator will decrease, and a larger OPBO will cause a decrease in efficiency. 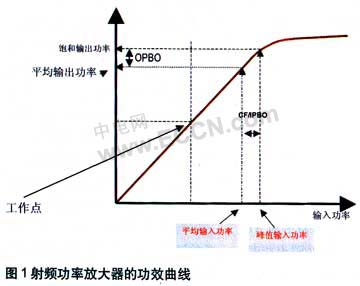 The efficiency of typical RFPA of different types of amplifiers with strong transconductance nonlinearity is described in Figure 2, and the OPBO function is expressed in dB. For Class AB RFPA with 12dB OPBO, as the back-off increases, the efficiency decreases from 70% to about 10%. 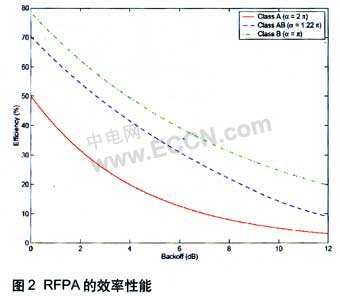 Considering the high CF of the signal, there are two ways to solve the problem of reduced efficiency caused by the increase of OPBO. One is to use an effective crest factor reduction (CFR) scheme to reduce the PAPR of multi-carrier input signals, and digital predistortion (DPD) to extend the linear operating range of RFPA. By reducing the PAPR of the RFPA combined input signal, the IPBO can be reduced, making the OPBO lower, thereby achieving efficiency improvements.

Compared with the case of not using CFR to achieve an 8% efficiency increase, a typical efficiency increase of approximately 16% can be achieved using the CFR scheme. In the following, we will review the commonly used technologies and discuss in detail the peak-to-crest factor reduction (PC-CFR) scheme in terms of performance and resource utilization of TD-SCDMA multi-carrier applications.

Xilinx recently proposed a technology called PC-CFR, which has been proven to perform better. At the same time, among other advantages, it can consume less resources because it reduces the computational burden by itself.

Before discussing PC-CFR in detail, we will first briefly review the three common technologies mentioned above.

PW-CFR is an extension of conventional limiting technology, and PAPR can be reduced by applying the time-domain scaling of the amplitude-limited signal. The equation used for conventional clipping is as follows: y [n] = c (n) Â· x (n) c (n) is defined by the following equation:

Where A is the maximum allowable amplitude limit signal. The idea is to use a smooth function b (n) instead of c (n) and use a suitable window to limit the spectrum spread of the limited signal. The block diagram of PW-CFR is shown in Figure 3. 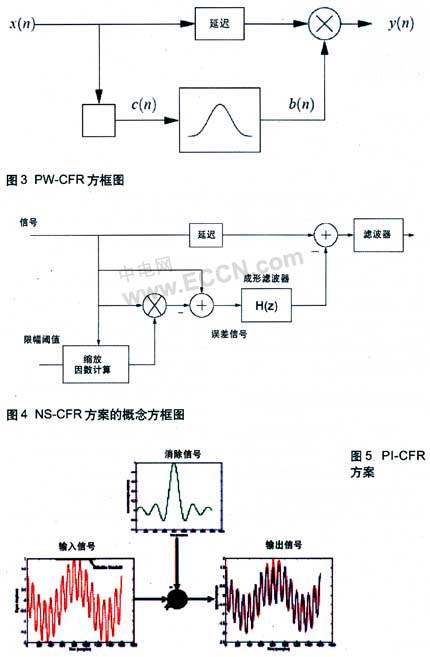 The performance of the signal y (n) adjacent channel leakage power ratio (ACLR) and error vector magnitude (EVM) processed by PW-CFR depends on the window used and the length of the window. The window length provides a compromise between ACLR and EVM performance. Longer windows can provide better ALCR, which is at the expense of EVM performance degradation.

This solution was first provided by Xilinx to the WCDMA digital front end and then WiMAX. By eliminating all sampling points that exceed a certain clipping threshold, NS-CFR can reduce CF.

Figure 4 depicts the block diagram of the NS-CFR system. Traditional polarity limiting is used to cut signal peaks above a certain threshold. The limiting signal is then shaped by noise to ensure that the noise caused by the limiting measures falls within the signal band.

The noise-shaped clipping signal is then eliminated from the original signal, thereby reducing PAPR. The above-mentioned processing may cause the peak value to rise again, and this scheme can be adopted repeatedly in the subsequent stage to mitigate the peak value from rising again.

The simplified version of the PI-CFR scheme is shown in Figure 5. This technique is usually equipped with last-stage digital clipping.

In essence, the PI-CFR scheme detects the peak of the introduced high PAPR signal at a small sampling rate, and for each peak that exceeds the limiting threshold, a corresponding "whole" signal with the same amplitude will be generated with the opposite phase . The resulting signal is then used to eliminate the detected peak signal, as shown in the block diagram of FIG.

A typical PI-CFR system contains a large number of detection and elimination (PDC), and a limited number of pulse generators. In this process, the peak value may rise again due to the simultaneous use of multiple PDC stages.

PC-CFR technology uses a technology similar to NS-CFR to shrink the CF. However, unlike the NS-CFR described above, the signal regenerated by spectrum shaping in the PC-CFR scheme is based on the peak sampling point, and this signal is used to cut the original peak signal that exceeds the threshold after proper delay processing. However, for NS-CFR, all the noise samples with limited amplitude are filtered out and used to subtract the corresponding original delayed peak signal.

As a simplified method using only peak sampling points for reduction, it has less distortion and requires less computational burden. In each PC-CFR stage, it contains up to 4 elimination pulse generators (CPG) and has a complex peak scaling function. Another advantage of the PC-CFR scheme is its flexibility, that is, it can support multiple air interface standards by appropriately changing filters on the same system. 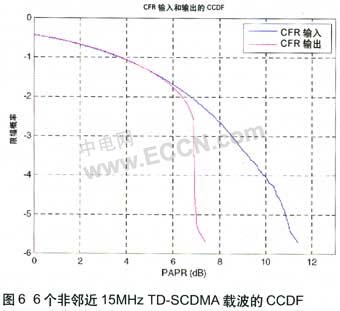 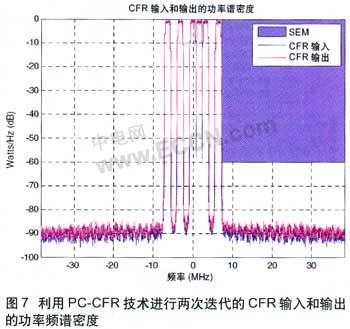 Figure 8 shows the performance comparison between PC-CFR, NS-CFR and PW-CFR. Note that PC-CFR provides the best performance for different EVM values, and if you exceed two PC-CFR iterations, the performance will hardly increase. 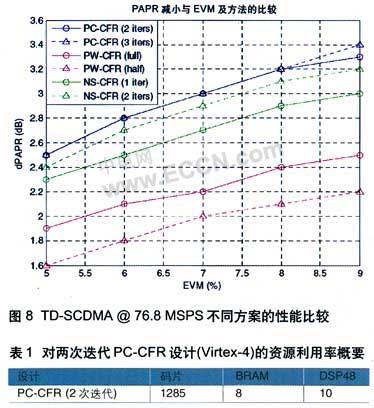 According to the data in Table 2, the designer can build a complete 6C6A digital front-end solution using two V4SX35 FPGAs. This scheme uses CFR measures to provide more efficient RFPA operation. This is critical, especially in RRU working environments that require conduction cooling.

As can be seen from this article, the PC-CFR scheme is clearly the winner because it can provide better performance and lower FPGA resource utilization than other known schemes. These advantages, combined with the availability of compatible TD-SCDMA DFE reference designs, allow infrastructure equipment developers to shorten time to market and have a greater chance of success. 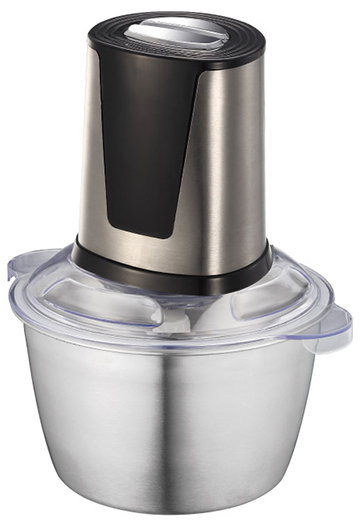