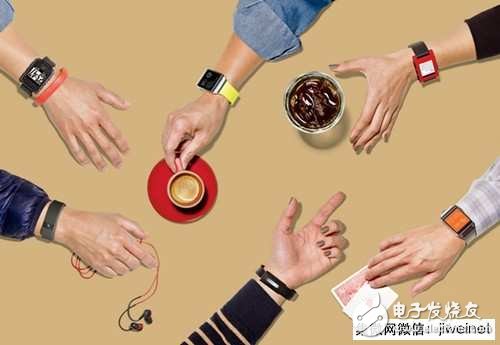 Although domestic merchants have introduced a lot of wearable products, most of the most important chips are foreign products. For example, Huawei's Watch uses the Qualcomm chip solution, which lacks core technology.

IC design companies in the domestic ARM camp have also launched their own IoT chips and wearable chips, but they are all buying ARM's micro-architecture integrated SOC products, and can't talk about independent intellectual property rights.

Beijing Junzheng, a product of a well-known IC design company, can be said to be one of the few IC design companies in China that have independent intellectual property rights and are commercially available in the form of wearable chips and IoT chips.

1. The past and present life of Beijing Junzheng

To tell the story of Beijing Junzheng's past and present, it is impossible to leave a person - Academician Ni Guangnan.

At that time, Ni Guangnan, the former chief engineer of Lenovo, was squandered by Liu Chuanzhi after Liu Caizhiâ€™s disagreement over â€œtechnical industry and tradeâ€ and â€œtrade and industry skillsâ€. However, Ni Guangnan did not give up the ideal of designing Chinese-made chips, and took a technical team to find investors to restart the chip design.

Later, Ni Guangnan found Li Delei, funded by Li Delei, and the state also provided a sum of money to start the research and development of the Ark 1 chip. The successful development of Ark 1 in 2001 inspired the country's confidence in the "Ark 2" chip. A large number of national special funds were directed to Ark Technology, such as the "863 Project" and the Ministry of Industry and Information Technology (which may still be called the Ministry of Information Industry). Research projects.

Ni Guangnan also brought the first customer, Beijing Yuxing Technology Company, to Ark by his own network. Out of trust in Ni, Yuxing Technology invested millions of dollars and abandoned Intel to invest in the Ark chip camp. What Ni Guangnan never expected was that Li Delei refused to supply.

Subsequently, Ni Guangnan was swept out by Li Delei...

Then, the huge amount of state subsidies for Ark's research and development funds are missing, and Ark is on the verge of bankruptcy...

Although the Ark died, Ni Guangnan trained the team through the Ark chip project and trained a group of IC design talents. These people took over the legacy of the Ark chip and continued to develop and design the domestic CPU. In 2005, Beijing Junzheng Company was established.

The second phase is based on the MIPS II instruction set and adds the VPU decoding core. The products are Z4755 and Z4760.

The fourth phase of the redesigned nine-stage pipeline (formerly eight) and increased simultaneous multi-core support, the product has Z4780 and M200. 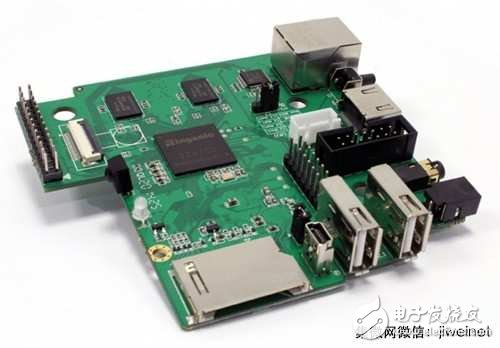 Because Jun Zheng believes that these four updates to the microstructure are not subversive advancements, so they are called XBurst. At present, the XBurst0 micro-structure and the better performance of XBurst2, which further reduce power consumption, have been completed and are being put into commercial use.

XBurst has a relatively high performance-to-power ratio. According to the enthusiast's actual measurement, in the GCC compiler environment, the XBurst SPEC2000 test of 1G frequency is 190 points. 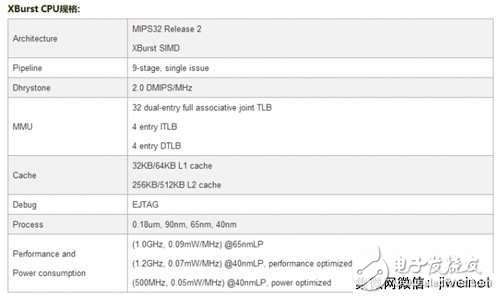 And Jun is in many ways more flexible than the Godson.

For example, actively engage with MIPS, purchase MIPS32 instructions, and jointly build the MIPS ecosystem. Actively working with ImaginaTIon, and ImaginaTIon pulled Google again, enabling Junzheng to use not only ImaginaTIon's PowerVR, but also Junzheng's support for native Android. 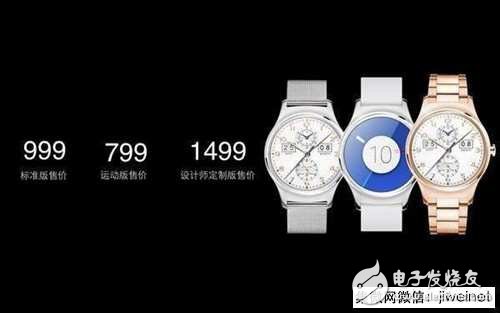 Compared with the independent and independent, self-reliant, more idealized dragon core. Jun Zheng is obviously more commercial. It is precisely because of this, Jun is closely watching the market and firmly grasping the direction of market development. Junzheng's chips are widely used in MP4, repeater, dot reading machine, learning machine and attendance machine.

Although the IC design companies in the domestic ARM camp have also launched their own IoT chips and wearable chips, they are all buying ARM's micro-architecture integrated SOC products, such as Cortex A core and Cortex M core, which cannot be said to be independent intellectual property rights.

Beijing Jun is one of the earliest local IC design companies focusing on wearable and Internet of Things. With more than ten years of experience in chip design and technology accumulation, the first batch of smart watches listed in China includes the first generation of shells. Smart watches, Tuman generation, Tuman second-generation smart watches, etc. have adopted Junzheng's plan.

Let's talk specifically about the M200 and X1000 for wearables and the Internet of Things. 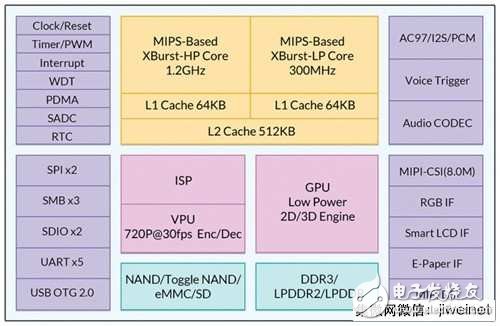 The biggest advantage of the M200 chip solution is the endurance. In the comparison of data between Ingenic Glass and Google Glass, Ingenic Glass is superior in terms of battery life, heat, temperature, size and cost.

In terms of smart watches, it is necessary to charge 2 times a day compared to a big brand. According to the business propaganda, the smart watch with Junzheng M200 chip can realize 2-3 days of charge once, and in the power-saving mode, the limit state can reach one charge per charge. At present, inWatch T, Sharp X3, GEAK Watch II, CoolGlass ONE, Zhongjing smart glasses and other products use M200 chip solution.

For the IoT platform, the X1000 uses a 32-bit XBurst single-core CPU with a clock speed of 1GHz and an open source Linux 3.10 operating system.

The X1000 has four advantages:

First, the integrated double-precision floating-point unit, the X1000 recognizes machine vision and can be widely used in industrial fields.

The third is to integrate low-power voice wake-up engine and a variety of hardware filters, which perfectly supports zero-touch voice interaction, which can accurately and quickly recognize the voice commands issued by the user and make corresponding action instructions.

The fourth is to integrate AES and RSA encryption engine at the hardware level to effectively protect private data and ensure the security of user information. Its built-in Security Subsystem embeds a small memory space and a microcontroller-like chip that can independently run codecs. 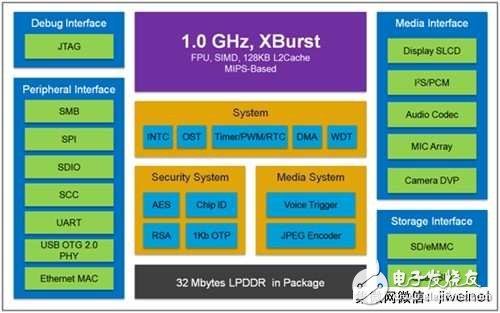 According to the author's news, Jun is planning to sell the X1000 to 15-20 yuan, and the open source development board equipped with the X1000 can be sold to around 100. The extremely low price plus the chip itself integrates RAM, the peripheral circuit is relatively simple, the X1000 can even act as a "super microcontroller" across the boundary, with the same price and several times the performance to the lightweight embedding currently controlled by STM32. The market is starting to compete asymmetrically.

Three piles of a fence, three gangs of a hero. In the era of the Internet of Everything, if an IC design company wants to succeed, it must be inseparable from many partners and a good ecosystem. Through the mutual help and cooperation with partners, Beijing Junzheng has built an ecosystem from chips, modules, solutions, smart hardware, APPs to cloud services in the field of wearables and Internet of Things. Although this ecology is still in its infancy, it is also It is quite a prototype.